Happy Thanksgiving and thank you for a great year.

The staff at Camelot Pressure Washing in Harrisburg, NC is grateful and hopes that your Thanksgiving is about taking the time to appreciate everything good in 2019. Our staff members also hope that it will be a safe and happy holiday for you, your family and your friends.
We encourage you to spend Thanksgiving day telling the people in your life just how thankful you are for them. Tell them, text or email them, or even send a note through the mail. We know that when people say nice things about us — see below — if makes us feel great and want to make sure each client is happy with our work. Payment for a job well done is nice, but compliments about how we do our job, is a bonus that is priceless. We can guarantee NO ONE will be upset that you took the time and consideration to be appreciative.
And while you’re thinking of who you can reach out to during the Thanksgiving season, enjoy these Thanksgiving trivia questions:

Did You Know This About Thanksgiving?

1. What year was the celebration that is most commonly considered to be the first Thanksgiving?

2. How long did the first Thanksgiving celebration last?

A: Three days. It was celebrated much earlier than our current celebration, possibly in late September. There were about 50 European settlers and around 90 native Americans (from the Wampanoag tribe) who attended the multi-day feast.

3. Under which president did Thanksgiving become an annual holiday?

4. Was turkey served at the first Thanksgiving?

A: Turkey wasn’t served at the first Thanksgiving. Legend has it that venison, duck, goose, oysters, lobster, eel, and fish were shared, along with pumpkins and cranberries. Surprisingly, it is believed that the pumpkins were served in a stew and in pies, although slightly different than we make today.

5. Which president was the first to give a turkey a presidential pardon?

A: Ronald Reagan. John F. Kennedy was the first president on record for unofficially sparing a Turkey in 1963. The Reagan administration in 1987 gave the first official presidential pardon to a turkey as a joke. The turkey was spared and put into a petting zoo. George H. Bush made it an annual tradition in 1989 and each president since has carried on the tradition. 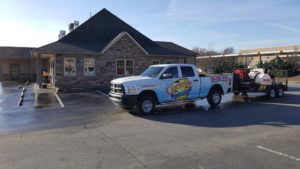 Thankful for Kind Words About our Pressure Washing Work

“I would like to take a moment to highly recommend the services of Camelot Pressure Washing. I contacted them after being given a run around by another “pressure washer” who in fact only did this as side work. John, HOWEVER, was immediate in his responses. He prepared an estimate before any work was done; on time and as he stated that he would. He then scheduled with me and performed a marvelous job. My house and driveway look better than when we moved in the house 7 years ago. He simply did what he said. I am in the service industry also, and understand what it means to provide quality customer service. John will not disappoint you! I took several business cards from him to share with my realtor and friends!” – Brian,  Concord, NC

We hope you enjoy the entire Thanksgiving week. Contact us here to schedule a pressure washing appointment to clean your sidewalks, driveway, siding, gutters, deck, and/or fence in the greater Charlotte, NC area. We still have some openings on our December schedule. If you want to talk with us about our work, call 704-400-0623.